Seated in the heart of Western New York, the Marilla Country Store will invigorate your senses as you make your way through our vast array of unique gifts, rustic home decor, delicious food and candy, and one-of-a-kind handmade items. Experience why, for over 160 years, thousands of Western New York families and travelers from all over the world who have made Marilla Country Store a seasonal destination have all echoed the same sentiment:

In 2000, Sandy and Paul Grunzweig became the 3rd ownership family in the store’s history when they purchased what was then called the Marilla General Store from Sandy’s parents, the Gingerichs. It was Sandy and Paul who changed the name to Marilla Country Store, and are responsible for the store’s continued expansion. Now, they are proud to welcome guests to the store from all corners of the globe. 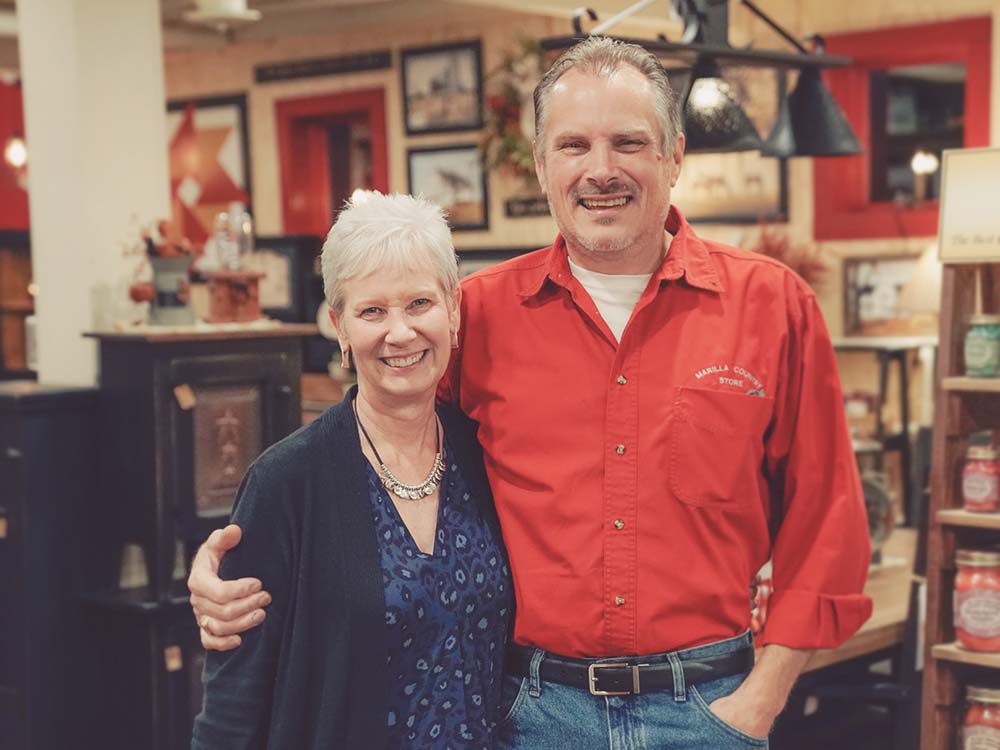 In 1851, an unfortunate tragedy involving a cornfield and a team of oxen led to a fortuitous trade that made Harrison T. Foster the first owner of what would come to be known as the Marilla Country Store. Over the next 160 years, the store would undergo two name changes, three ownership changes, an attempted robbery, and a massive expansion to over three floors.

But, one thing has always remained the same. The Marilla Country Store has consistently provided all who have visited, from the earliest settlers, to modern Western New York families, to travelers from all over the world, with an unforgettable, homegrown experience.

It hasn’t always been all candy and flowers here at Marilla Country Store. In this video, Sandy tells a story about one of the more – shall we say – explosive moments in the store’s history.

In 1979, Sandy’s parents, the Gingerichs, began accumulating artifacts from the store’s past and established the Marilla Country Store Museum on the second floor. Visit and be transported back in time! The museum features old display cases filled with artifacts accumulated over the store’s history. Its walls are adorned with newspaper ads and clippings, and even some of the original account ledgers from back in the days when visitors could barter a dozen eggs for a pound of flour!

No visit to Marilla Country Store is complete without stopping into the museum to pay tribute to the store’s long history.

Since 1851, Western New York families and travelers alike have celebrated their summers with a trip to MCS. With a wide selection of unique gifts, fresh groceries, and stunning home decor, you never know what treasures you might find!